History is witness to superhumans born with gifted powers to acquire multiple academic accolades or excel in their fields at a very young age. These were the people who showed the world the extraordinary power of the human brain. These were the people who innovated and gave back to humanity in terms of their research and innovations. Their life story is enchanting but not one that everyone could relate to.

However, there is one South Asian woman in Canada who is challenging this very notion, an individual who has demonstrated that you do not have to be superhuman to achieve the extraordinary in life. All you need is dedication, hard work, and goal setting. She is Dr. Shawna Pandya from Alberta. Pandya is just 33 years old, and to date, in addition to being a practicing physician, she has, at times, been an international Taekwondo & Muay Thai champion, a public speaker, an entrepreneur at Silicon Valley, a space researcher, an intern at NASA- Johnson Space Center, a model, university lecturer, and is soon to be a licensed pilot.

For Pandya, the sky is the limit and quite literally because she is also working with various Space projects which will require her to pass the 100 km Karman line, the boundary where space begins, and hence will be acknowledged as an astronaut soon.
What else she wants to achieve? Her answer is, “I am just getting started.” Pandya, did her undergraduate Honors Bachelor’s degree in neuroscience, followed by a Masters in Space Studies at the International Space University, before entering medicine and obtaining her MD. Thereafter, she trained as a neurosurgeon for nearly 3 years before switching over to general practice. Her dream is to combine her medicine and space knowledge to further research in space medicine — that will include studying how our bodies will react in a completely different environment from Earth.

When asked what is the secret behind her multiple career options from medicine to space studies and how she manages to juggle everything, Shawna stresses that many of her accomplishments came from hard work, not simply a natural aptitude. “Hard work and time management – I was not born as someone who was gifted like my brother. He can memorize a textbook in one night. In school he was a natural scholar. It was easy for him to be on top of the class. He set the standards for me. And I studied very, very hard to be on top of my studies.”

Pandya was born in Brandon, Manitoba, to Indian parents who came to Canada in 1980s from Maharashtra, India. “My parents packed whatever they had in India and came to Canada to give a better future to their kids. It was a hard decision for them since they left their family, friends and basically everything. My father worked as a physiotherapist and mother worked as an office manager. They are very dedicated parents and encouraged us to achieve our dreams. My first valuable lessons about work ethic and dedication come from them. They taught me to be dedicated and loyal to the people who are important to you.”

Pandya did her schooling in Edmonton. Everything intrigued her as a child, and knowledge had no limits according to her. She wanted to grow up and explore beyond the skies so she kept reading and learning. She wanted to be a neurosurgeon, a billionaire, a superhero, and go to Space. A part of her inspiration to pursue medicine and be an astronaut comes from Roberta Bondar, Canada’s First Female Astronaut and the first neurologist in Space.

Pandya, who is also a motivational speaker, said in a previous TEDx talk on technology and innovations that she used to be scared to talk about her dreams and goals. “When I grew up, the first thing that I realized was that you should always share your ideas and knowledge,” because there are always people out there to invest your dreams.

When Pandya was growing up she realized that her dreams were unrealistic but not impossible. “You cannot go to school and say ‘I want to be an astronaut.’ You have to be an either an engineer, a pilot, scientist or a combination.”

Pandya picked medicine. After graduating from high school, she sought admission to the ‘University of Alberta’ in the field of neuroscience. After completing her degree in Honors Neuroscience, she decided to do her MD. But she had a backup plan in case she did not get admitted to MD. She also applied for the Masters program at the International Space University in France. Luckily, she was accepted to both.

She decided to put her MD in medicine on hold and attend the ISU Masters program. She received a scholarship to complete her program. “At the university, I was part of a team that looked at being able to extract and store oxygen and hydrogen that was found on the moon. The research became more important after a year when the presence of water on moon was confirmed.”

As part of her Masters work, she went on to intern at the European Astronaut Centre in Germany where her work was to catalogue potential risks related to a new space delivery vehicle. She also got to know about Singularity University in Silicon Valley, California soon after. “The whole premise of this university is to take the best of what we have done as humans in terms of technology, innovations, creations and pair them with worst of human challenges like health care, energy, water, climate change. Its aim is to positively impact 1 billion people in 10 years. When I heard about it I wanted to be part of this amazing place.” 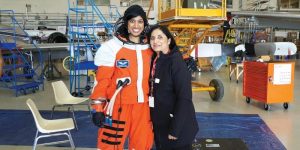 Her entrepreneurial qualities were discovered at that time. Pandya co-founded ‘CiviGuard Technologies’ at Silicon Valley. The company’s aim is to use smartphones for disaster response.

It was at that time she furthered her interest in Space. In 2012 she was one of the two Canadians to be selected by Canadian Space agency to intern at NASA. She got more involved in conference and research related to space.

Her dream of becoming a astronaut was nowhere closer. But as a woman who dared to dream big, she never gave up on her hope. In 2016 she got the opportunity to work and train as a citizen-scientist astronaut candidate under two major projects – Polar Suborbital Science of the Upper Mesosphere (PoSSUM) and Physiological, Health and Environmental Observations in Microgravity (PHEnOM). At project PoSSUM, her goal is to study noctilucent cloud formation, a special cloud that has recently appeared and seems to be a marker of climate change. Both these missions focus on suborbital research, meaning she will have to pass the 100 km Karman line, arbitrarily defined as the line where space begins, and hence will be acknowledged as an astronaut.

In 2016, she was also named to the prime crew of Project Poseidon. The program is a 100-day underwater research and exploration project. Project Poseidon will commence in the year 2019.

When Pandya is not studying or practicing medicine, she can be found in the do-jang. She has been practicing taekwondo for 17 years, and is a second-degree black belt. She also recently entered and won her first amateur Muay Thai competition in Thailand.
It seems very rare to find people involved in academic work as well as gruelling physical activity, so what attracted her towards the martial arts? She says it is a misnomer that you could either be an athletic or excellent in studies. “When I got into medical studies I learned that there were different types of intelligence — being social smart, book smart or athletically smart etc. But you don’t have to choose one type. The all can co-exist and in fact when you chose different types of intelligence you are stimulating your brain further.”

Even her message to youth is related to this. She says that as important as natural aptitude is, passion, discipline and a solid work ethic are just as critical for success.

Pandya is currently based in Saskatchewan where she is pursuing an extra year of training in Enhanced Surgical Skills to qualify as a GP-Surgeon.