She got her first spanking when she was three-years-old and would cross the road to ask neighbours if they’d like to hear her sing.

But an undaunted Lesley MacDonald went on to entertain and on Friday a sold-out crowd of 900 attended her 22nd annual Women of Vision Celebration.

“The idea is to celebrate women in the Edmonton area who demonstrate the power of a vision greater than themselves,” says MacDonald.

“Hopefully their leadership and commitment will inspire others to achieve their own dreams.”

First up at the celebration at the Shaw Conference Centre was Dr. Shawna Pandya, 32, who dreamed of becoming a superhero and on finding that wasn’t a profession, became one anyway.

A former model, musician, skydiver, Silicon Valley entrepreneur and university lecturer, Pandya is now a doctor and studying how the extreme environments found in space affect the human body.

“I’m training for two citizenship astronaut missions and a mission that will keep me underwater for as long as 100 days,” Pandya told me Saturday after a workout as a first-degree Tae Kwon Do black belt.

“I honestly don’t think there are any limits to what we can do. Or if there are any, I haven’t found them yet. I’m not smarter. I just work harder.” 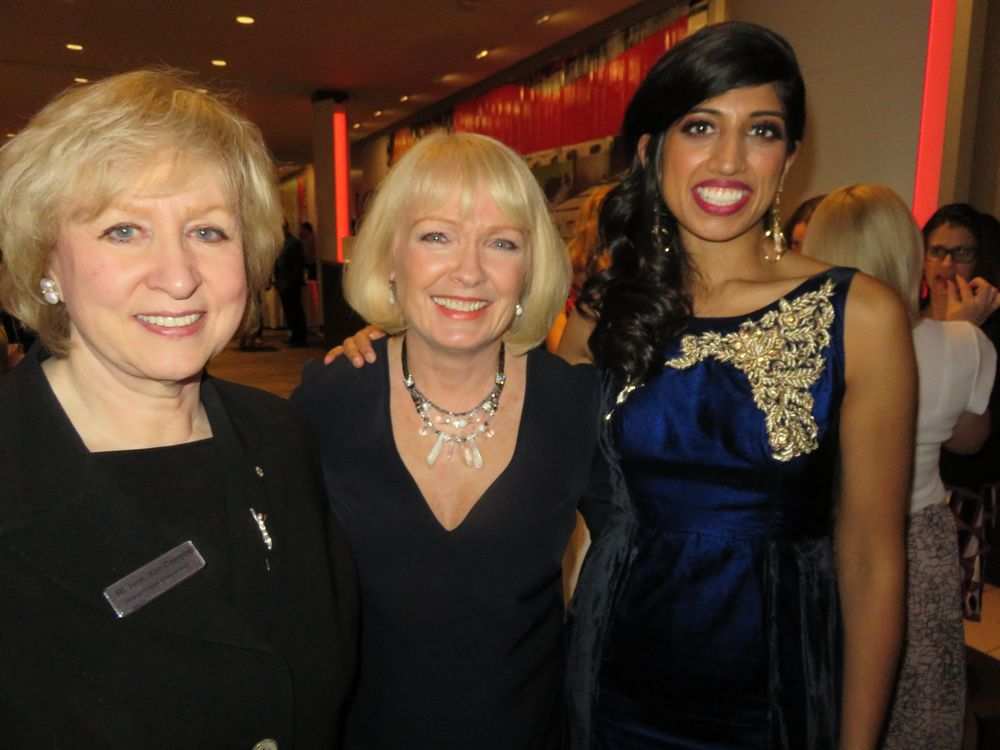 “Music helps us express ourselves in times of joy and celebration as well as times of sadness and trouble,” she said. “It helps us understand others, communicates our feelings and helps us feel connected.”

Canada’s first and only female prime minister, Kim Campbell, was also a recipient.

After running an arm over the mainly female room, she said: “This is what female leadership looks like and the women and men who get it, have to get the word out to men and women who don’t.”

Campbell, a founding member and principal of the U of A’s Peter Lougheed Leadership College, drew a standing ovation.

Women of Vision was created in 1995 when a survey the previous year revealed 84 per cent of young women were looking for a job rather than a career. Global (then ITV) asked news anchor MacDonald to “do something on women.”

The celebration she created now has bursary and scholarship awards.

Those were the days

The reunion was at the 26th annual Garlic Festival kick-off at downtown Sorrentino’s, where Westbury recalled teaching the students English and social studies in Grade 9.

“It was an early teaching job in Edmonton and I recall these boys being very bright, serious, co-operative and well-behaved,” she said.

Modry, who went on to pioneer heart-and-lung transplant surgery, said Westbury was an excellent teacher and was always elegantly attired.

“She looked like a teenager and about seven years older than us,” said Modry. “But her attractiveness was a distraction for our raging hormones.”

But Westbury had met her future husband, Bob, on the main street of Sydney, N.S., in 1953.

“Marilyn was 14 and I was 17,” says Bob Westbury, recipient of both the Order of Canada and the Alberta Order of Excellence.

“With raging testosterone surging through my veins, I was able to persuade her to come to a music store and listen to some records.”

His future wife left without showing interest in seeing him again, but Bob Westbury convinced her brother to invite him to their house to see his record collection. Cupid began a mission.

“Bob and I married when I was 19 and, both having graduated as teachers, we headed west to work,” said Marilyn Westbury.

She later received a doctorate in education and sociology at the U of A and became dean of two faculties at Edmonton’s Concordia University.

Her husband, who has worked for TransAlta and Telus and promoted many causes, raised $9.2 million to create the TransAlta Arts Barns from the old bus barns. The Fringe Festival named the Westbury Theatre for him.

But it’s not his remarkable community spirit that he believes holds his wife’s perpetual passion for him.

“We play tennis two or three times each week,” he says. “I walk and run in the river valley and I do my push-ups and sit ups every day. I’m an 80-year-old Charles Atlas.”