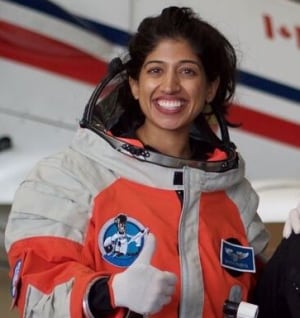 Canadians have a shot at being hired as an astronaut for the first time since 2009.

The Canadian Space Agency is accepting applications for two astronaut positions until Aug. 15. The recruitment campaign was announced on June 17. As of July 19, 3,372 Canadians had applied.

Over the course of a year, they’ll be whittled down to a short list of 200, then 40 finalists, following a series of written, physical and mental tests, along with interviews and security clearances. Ultimately, two astronauts will be chosen.

CBC News interviewed seven Canadians who are applying in order to give you a sense of who’s applying and what kind of competition astronaut candidates are up against.

Why she wants to be an astronaut:

“When I was 10, I became obsessed with astronomy,” Pandya said. “All my junior high science projects or reports, they were all space related … I think the idea of doing something that’s so adventurous and really pushes the bounds of exploration, and the fact that you’d get to space really, really resonated with me.”

She decided to study neuroscience because the first Canadian woman in space, Roberta Bondar, was a neuro-opthalmologist.

She applied to the CSA during the last astronaut recruitment campaign, when she was medical student, and thinks that was “invaluable” for knowing what the agency is looking for in an astronaut. Since then, “everything I’ve done in one respect or another, I feel has helped prepare me to becoming a competitive candidate.” But she says she’s not doing them just to prepare for the astronaut recruitment campaign. “I just love doing these things — I love exploration, I love adventure.”

She said the announcement of the latest astronaut recruitment campaign came sooner than expected and was “just such a happy surprise.”