Everyone—or almost everyone—loves a good origin story. From the New Testament to the neverending deaths of Bruce Wayne’s parents and Peter Parker’s uncle, we’re fascinated by the catalysts, epiphanies, and pivotal moments that make people who they are.

With that in mind, Fightland has started talking to our favorite professional and amateur fighters and enthusiasts about the first big defining moment that started them on their martial arts journeys. Whether it was their first sanctioned bout, their first sparring session, or even some random scrap on the street or playground, when did these future warriors first realize that combat was something that they wanted to—and could—do?

In today’s My First Fight, we talk to physician, Team Canada athlete, citizen-scientist astronaut candidate with Projects PoSSum and PHEnOM, pilot in training, and all-around super human Dr. Shawna Pandya about how she got her start in Taekwondo, her first amateur Muay Thai bout, and why she believes that her true first fight is always ahead of her. 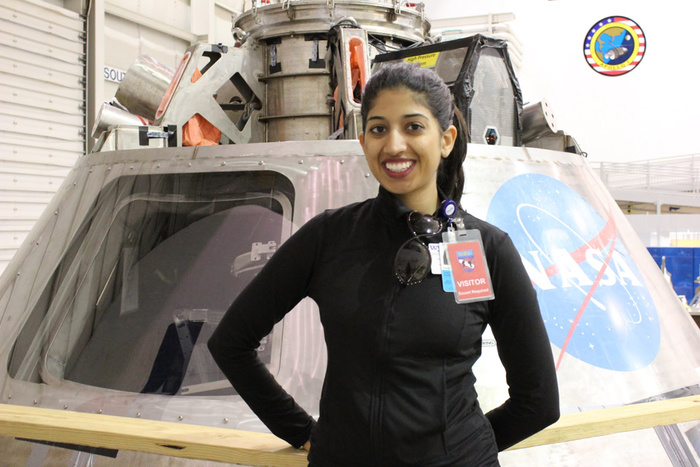 When she was 10, Shawna Pandya sat down to start seriously planning her future. “I was kind of a weird ambitious kid, and I made this bucket list of things that I needed to do with my life,” she tells Fightland. One of the items on that list packed with goals in the medical and aeronautics spheres was to get a black belt in something.

When she hadn’t accomplished everything on her list by the ripe old age of 15, Pandya started to panic. “I was like ‘Oh my God. What have I done with my life?’” she laughs. “So I thought, ‘OK. Time to join a martial art.’”

Pandya settled on Taekwondo both because the little she’d heard about the discipline intrigued her and because there was a dojo near her father’s physiotherapy clinic. Within months of starting, she was competing on the local level. Five years later, she earned her black belt and was able to cross that pivotal point off of her list.

Last October, for example, she competed in her first Worlds as a member of Canada’s Taekwondo Team, an experience that changed the way she approached everything from her footwork and strategy to her aggression. This past winter, she also added her first amateur Muay Thai bout to her impressive and varied CV.

Dr. Pandya first got hooked on Muay Thai a few years ago when an interest in psychological resilience led her to befriend a Navy Seal who then suggested that she join him for a training camp in Thailand (she explains the series of events in far better detail in her 2016 TEDx Talk On Success, Failure, and Pushing the Limits). Since then, she’s been making annual pilgrimages to Phuket to train when she has time off from her many other pursuits. This past trip was the first time that her she happened to be in town for one of Tiger Muay Thai’s BBQ Beatdown events.

“I was there for 10-ish days and I was thinking to myself ‘I’m only there for such a limited time. I want to go hard.’” she recalls. “I was probably training to the point of overtraining, so I was going to every single Muay Thai class they offered. I met up with some awesome but crazy Germans, Irishmen and Canadians, so we’d train after class and get our sparring on. So some days it would be 6 hours of cardio and training a day and it was quite intense.”

So when she was first asked if she’d like to compete in an amateur fight as part of BBQ Beatdown, she wondered if she might be pushing herself too far. “Part of me was like ‘Should I do this?’ And the other part of me was like ‘You’ve thought about it. Of course you’re going to do this.’” 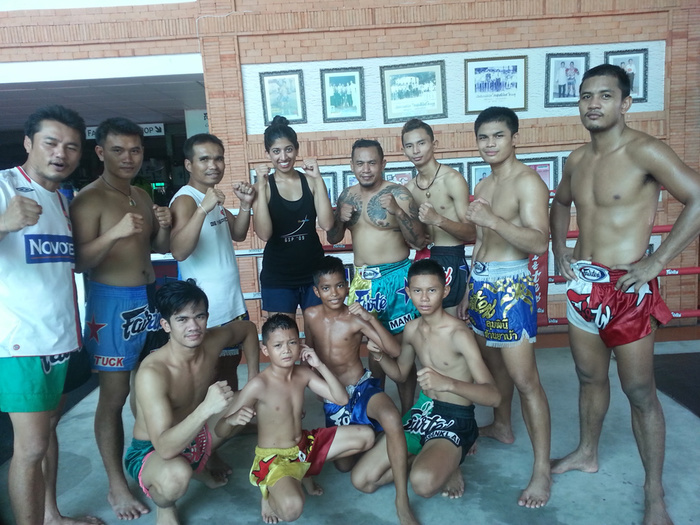 With that, Pandya began to mentally and physically prepare herself for the fight. She scouted her opponent—a boxer with MMA training who had 35 pounds on her but happened to be the only other amateur woman to sign up—to assess her strengths and weaknesses. She also turned to Fast Company and the Harvard Business Review for guidance. “There was this article on resilience that I read that said you’re most likely to be successful when you go into anything competitive, whether it’s a board room or a boxing ring, when, instead of thinking ‘I hope I survive this,” you think ‘How am I going to win this?’”

Pandya’s plans for domination included 5 go-to moves that she knew she could rely on, even with her limited amount of Muay Thai training, and an unceasing desire to win. “I had all of these plans for the fight and then it’s so funny,” she muses. “You step in the ring and that saying ‘everyone has a plan until they get punched in the face’ is so true.”

Her opponent was tired and, by the time they stepped in the ring, Pandya could already tell that her heart wasn’t in it anymore. But that potential blood in the water did not mean that she had an easy fight ahead of her. In the first round, she lost a contact and a great deal of her depth perception along with it. By the second, her hair elastics had given up. To top it all off, her opponent was fighting like an entirely different person from the one she’d come to know so well during the scouting process.

“Maybe because of that fatigue, her style changed up tremendously. She was rushing me the entire fight, trying to use her weight and at times trying to go for the takedown which is, of course in, not allowed in Muay Thai,” she says. “So all of my plans for slipping, catching, leaning back and then countering, all of that went out the window and suddenly it was like ‘OK. Go back to what you know, but try to keep your hands up and learn how to hit hard.’ The biggest difference between Muay Thai and Taekwondo is that Taekwondo is very light. It’s like a game of tag and yeah, you’ll catch an occasional hard hit at the black belt and international level, but you’re not trying to go for the KO. That’s grounds for disqualification. Whereas here, it was ‘Let me at her! She’s keeping her guard down and I want to KO her.’”

Their 3 round fight was initially ruled a tie (“It’s not optimal,” Pandya thought to herself. “But at least I haven’t lost.”) but the ring master and the audience started chanting for one more round. Although they were both exhausted, the two women agreed to a tie-breaker.

“It’s the 4th round, I’m fighting with one eye closed, we’re both gassed, my hair’s in my face and I literally thought to myself ‘At this point, it’s a matter of who wants it most or who wants it more.’ I looked at her and I [realized] I want it more. My muscles, my arms, my legs were screaming at that point, like ‘just let me rest! I want to die!’ but I just had to hit her more than she hit me. I just had to go for it, and that’s the mentality that I had going into that 4th round.”

And that was enough to clinch it for her. On that night against that particular fighter, Pandya’s psychological resilience won the fight.

The experience has left a lasting impression on her, both physically and mentally. She’s currently applying everything she learned that night to her Taekwondo training as she prepares for provincial and national level competitions, as well as her upcoming test for her 2nd degree black belt. She’s also been able to bring the psychological lessons of that fight to her less combat-oriented pursuits, from her work as a doctor, to her pilot training, to her efforts to study in space.

“I think the resilience aspect of it,” Pandya says when asked about the ways in which her martial arts career has influenced the rest of her work. “When I was going through a tough time, or even when I’ve had a stressful day, I just keep going. You’re alive; you can’t be tired. And sometimes just getting that physical activity in there, getting that movement, hitting the heavy bag is just what the doctor ordered.”

Although it’s managed to influence so many aspects of her life since, Pandya is so unwilling to rest on her laurels that she’s hesitant to call her amateur bout in Thailand her official first fight. “I feel like every next fight is my first fight,” she says.