The Right Stuff (That’s What Teammates Are)

The Right Stuff (That’s What Teammates Are) 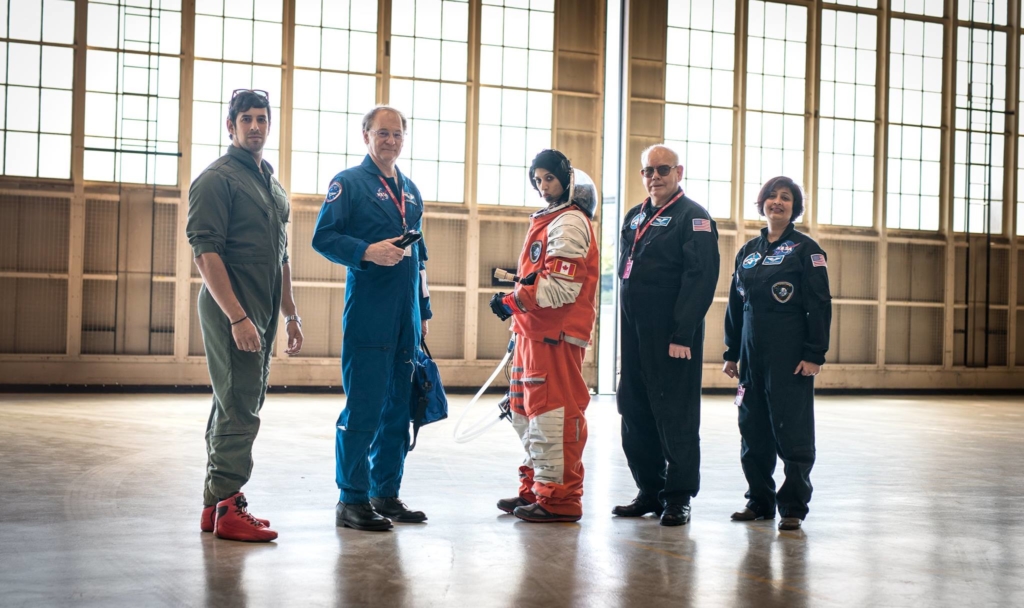 As I wait for clearance to tell you exactly what we were up to earlier this month with the PoSSUM crew and Final Frontier Design team in Florida, I want to take some time to tell you about what it is like working with a motley crew of citizen-scientist astronaut candidates that includes scientists, engineers, pilots, active-duty military service members, software developers and physicians. My teammates are a diamond-encrusted-unicorn combination of incredibly accomplished, brilliant, selfless, humble, creative and hard-working, and quite frankly, what I would deem some of the world’s best teammates.

As I wait for clearance to tell you exactly what we were up to earlier this month with the PoSSUM crew and Final Frontier Design team in Florida, I want to take some time to tell you about what it is like working with a motley crew of citizen-scientist astronaut candidates that includes scientists, engineers, pilots, active-duty military service members, software developers and physicians. My teammates are a diamond-encrusted-unicorn combination of incredibly accomplished, brilliant, selfless, humble, creative and hard-working, and quite frankly, what I would deem some of the world’s best teammates.

They step up. I sent out an email to the crew prior to landing in Florida, asking for an airport pick-up. Within minutes, one teammate sent me confirmation that he would be arriving several hours later, and I was more than welcome to ride with him. Upon landing, I had a message from another two teammates, saying that they would be there within 10 minutes – no matter that it was an hour’s drive away (one-way) from where we are staying.

They are mission-first. When it quickly becomes apparent that our test setup would require (not in)significant modifications before it could fly, everyone steps up without hesitation to perform last-minute hardware store runs, cut metal, drill, fix, modify, screw in, take down, readjust and reconfigure our set-up. No egos, no questions asked, no “can’t someone else do it,” no “that’s not my job,” no “let’s do it my way” – simply everyone stepping up (or even stepping aside when needed), looking to fill any and all gaps before we fly.

They look for things to do. “How can I help?” is a common refrain amongst this crew. Two teammates stand out in particular, because it is always the first thing they ask if they notice a teammates hands are full and theirs are not. They are constantly aware of the situation, and let the team know that there is an an extra pair of hands should there be a need. They do this quietly, seamlessly and without ego. They do it for the good of the team.

They share their knowledge. The flip side of stepping up with “all hands on deck,” is that some of us are more handy and tech-savvy than others (well, me), being a crew of engineers, builders, and techies. I am definitely less handy, but I step up anyways, to help modify our rig, less-than-deftly handling the adjustable wrench, socket wrench, nuts, bolts and washers. No one pushes me aside, even if they are faster or more capable with the rig – they answer my questions, and we work as a team to reset our configuration, readjust, redrill, and remodify until we are happy. They share their expertise and their knowledge to build each other up.

They go above and beyond. We are all about the science, but there is a certain joy in sharing our experiences and lessons learned with the world, too. Time and time again, without being asked, a small contingent of our crew has taken it upon themselves to bring their own video and camera equipment to each mission, taking the time to set-up, test, record, download and distribute our flight-tests. They don’t need to do this; they don’t need to bring their own equipment and risk the wear-and-tear. They don’t need to invest that much of their own time and effort. But they do, time after time.

They are dedicated. Every new mission and scientific expedition is a new adventure. Sometimes we run 14 to 16 hour days in briefings, pre-flight tests and debriefings – but that doesn’t mean life stops in the interim. Oftentimes, after a marathon day, team members will run back to their hotel rooms to start their ‘second shift,’ doffing their Batman citizen-scientist astronaut candidate personas to return to their everyday Bruce Wayne lives as professionals, graduate students and family members, even pulling all nighters to work on grant submissions, assignment or job deadlines, answer emails or Skype with kids. The story is nearly universal amongst my teammates, but there is no lamentation or “this is too hard” or “I have too much going on,” or “I can’t do this” – just dedication and hard work.

They build, not blame. I am down when my testflight doesn’t exactly go as planned, and I keep apologizing to the Test Director for it. “Stop apologizing!” he finally says (I try to explain that I am Canadian and can’t help it) – but while we are all disappointed in my performance and the testflight results, there is no blame, simply a debriefing in which we pass on our lessons learned to the next crew, and dissect the chain of events and subsequent data points together to figure out where we might avoid future recurrences and improve our performance in the future.

There is no ‘me-first.’ In a moment of downtime after I fly, I ask another crewmate about his mother, who was ailing when we met earlier this year. He tells me that he buried her two days earlier, and I am floored. There is no self-pity – just pure compassion and regard for all of his teammates – both here in Florida, and for his mother, who, as he relates, he saw as a crewmate who needed him and for whom he did his best. But he brings none of his sorrow to the mission or crew dynamic – just his usual humility, good grace and universal regard for his teammates. But even if he did – we would exhibit the same compassion and understanding for him, because at the end of the day…

We are like family. Every mission is like a reunion, and we pick up right where we left off, talking about space stuff, fun stuff, current events stuff, tough stuff and personal stuff. The crew roster changes from mission to mission, and we celebrate the reunions and lament (and send silly space selfies to) those who aren’t there. We laugh like crazy together. We celebrate our fanatical love of space together, talking space history, space news, and watching space movies in Russian together (yes, there are subtitles). On a day off, we take a field-trip to NASA’s Kennedy Space Center together, and we may as be in Disneyland, we are so over-the-Moon to be there (other NASA visitors can definitely tell) – and when we go, Einstein’s theory of relativity is proven correct: the day flies by, and before we know it, we shut the place down, leaving only because the place is closing.

This is the ‘Right Stuff.’

This is what teammates are.

We build and grow together.

We make each other better.

And we can’t wait until the next time. 🚀🌠